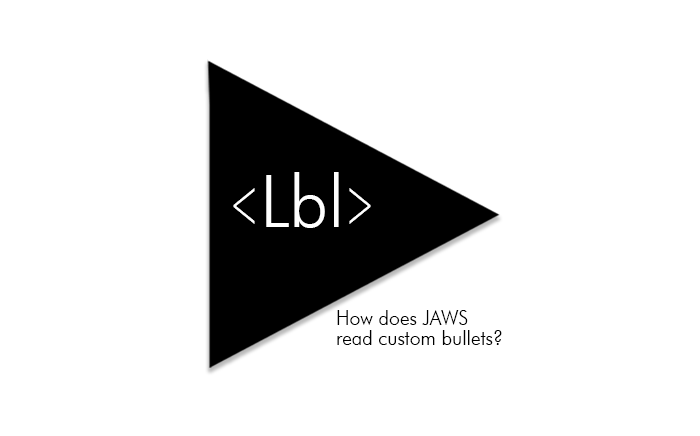 How does JAWS voice my bullets:

Recently, one of our clients decided to add a bunch of non-standard bullets to their PowerPoint. When I ran it through JAWS I realized that the results were probably not what the client expected. Hearing “black right pointing pointer” each time the bullet was read was probably not the user experience they were counting on.

So, I decided to take the time to build a list of all the bullets that they typically use (Arial) and all of the ones that people seem to gravitate toward (wingdings). I found it interesting that some of the bullets were read as you might expect, while others had some unique voicings.  “Black right pointing pointer,” “black left pointing pointer,” “black up pointing triangle,” and “black down pointing triangle.” Triangle? why wouldn’t it simply be “black up pointing pointer” or “down pointing pointer” instead of triangle?  “Lozenge”, for a hollow diamond character, was another one that kind of threw me for a loop. But the one that most people use is the “hollow circle” which typically gets voiced as “oh.”  I find this one most frequently. And there were things like the “reverse not signed” bullet and the solid Square being read as “em dash bullet” while the drop shadow checkbox was read as “Hollow Square Bullet.”

When remediating documents, the more often we can create a seamless workflow, the better the experience and the quicker we can perform the remediation required to make the document compliant. So, developing accepted list of bullets as a standard can only benefit everyone involved.

How to set actual text for bullets

However, if you simply must use a non-standard bullet like the “star” or “bullseye” there are ways to make them read as you I would hope they read. This may require more than one step for remediation as it depends on what program you export from. For example, MS Word combines both the <LI> and the <Lbody> into one <LI> tag omitting the <Lbody>, while InDesign will separate them into the properly nested tags.  When they are separated you have the ability to set actual text for a bullet so that you can force it to be voiced as “bullet” or “star” or whatever you like. The trade-off is that this takes time and effort to hunt them all down in the document.

So, ask yourself, “Self, do I want to spend 4 hours editing bullets or would I rather simply use something more standard and not have to hunt down bullets, split tags and set actual text properties. When that document contains more than just a few pages the remediation process becomes cumbersome and the time tradeoff may not be worth it to simply have a bullseye versus the standard bullet.

I have attached the PDF to this post so that you can see what JAWS reads out loud given the corresponding bullet. Download the bullet list pdf.